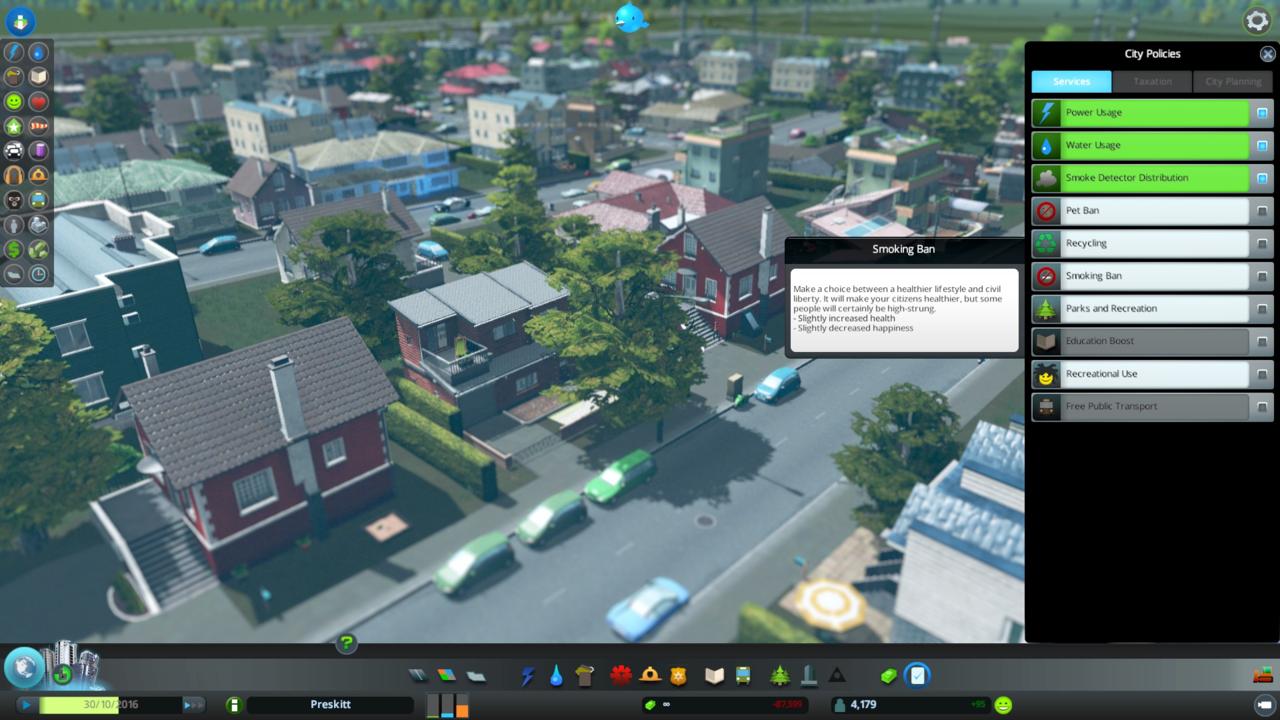 Editor’s note: We have updated this review to reflect our experience with the Nintendo Switch version of Cities: Skylines. See the end of the review for our thoughts.

Now this is more like it. Even though my real-world occupation as the mayor of a Canadian town means that I try to escape such things as budget meetings and zoning hearings when I play games, Cities: Skylines still managed to hook me due to its authenticity. Unlike the latest

Is it too geeky to be excited about the use of zoning rules and policies in a city-building game?

Making comparisons between games is not always helpful, but in this case, it’s difficult to ignore the tight relationship between Cities: Skylines and its SimCity inspiration. Colossal Order delves deep into what Maxis and EA once made so popular with a traditional city-building approach. Few surprises or even significant innovations can be found here: There is just a standard single-player mode of play in which you choose from a handful of maps representing territory types ranging from flat plains to tropical beaches. You may also play the game with standard conditions, dial up the difficulty, and/or turn on sandbox and unlimited-money mods. No tutorial is included, either, which makes for a learning curve at the beginning. At least tips are provided on a continual basis during regular play.

Multiplayer is totally absent, as are frilly options like disasters and giant monster attacks. There are no multiple-city games, either. You have one city to deal with, along with a mostly invisible outside world that allows you to buy and sell goods on a common market. The game has been developed with modding in mind, however, and it ships with a full editor. Therefore, you can expect a lot of user-made add-ons to hit the net shortly. Nonetheless, at the present time, this “just the facts” focus makes for an initially bland experience. The plainness is exacerbated by stark menu screens and dated visuals that are attractive enough to get by, while at the same time cutting corners by cloning buildings and signs, as well as lacking amenities like a day-night cycle and weather patterns.

If you have been jonesing to be a virtual mayor, though, Cities: Skylines gets nearly everything else just right. First off is zoning. You have full control over zoning neighborhoods as low or high (medium is absent, although I didn’t miss it) residential, commercial, and industrial. These basic mechanics provide thorough control over laying out cities, which gives you a real sense of being in charge. Second up is map size, which allows for a lot of stretching out. The initial size is restrictive at 2km by 2km, but you can access more plots of land to eventually expand to a metropolis spanning a whopping 36 square km. That allows for expansive burgs, and an incredible sense of freedom. You always have room to correct mistakes and grow out of early problems, making you feel more like the super-mayor that you should feel like, and not the goofball constantly demolishing whole neighborhoods to fix problems you couldn’t have foreseen three hours ago.

Two other great features involve establishing districts and policies. This allows for the creation of boroughs with separate identities (policies can be set to take in entire cities, as well) by drawing them out with the Paint District tool. If you want your very own Brooklyn hipsters or a hardhat neighborhood for factory Joes, you can paint out city blocks and then tweak localized settings. This allows you to offer free public transit, boost education, give away smoke detectors, get into high-tech homes, ban high rises, and even alter tax rates for different zones. You can also set up specific industrial areas to focus efforts there. So if you want a green city, allow only farming use in industrial zones. If you want to go in the other direction with the sort of hardcore factories that killed grandpa, you can set up oil or ore districts and watch the smokestacks pump out poison.

Policies are on the fanciful side, and establishing wildly different rules on social activities and even tax rates between neighborhoods in the same city will not go over well on election day. But I still love the ability to fine-tune cities without delving too deeply into micromanagement. The district and policy features combine to let me sketch out what I want in each part of my city–yes, this will be my gentrified borough for snotty white-collar professionals, complete with a smoking ban, no pets, no high rises, recycling, allowance for the use of certain controlled recreational substances, high-tech homes, and, of course, stupid high taxes–and then sit back and watch neighborhoods evolve.

The challenge is not pronounced, especially if you have city-building experience. You needn’t worry about random sparks somehow taking down whole blocks, or other acts of God obliterating all of your hard work. This gives Cities: Skylines a relaxed character, instead of coming across like a rigorous game loaded with set objectives and problems to be solved. It’s an old approach, but a great one, as it allows you to concentrate on the abstractions of building, instead of mindlessly racing around meeting random goals related to citizen happiness or residency numbers.

The only aspect of the game that becomes annoying to handle is transit. Given the same developer’s Cities in Motion series, you might expect roads, buses, and the like to take on a vital role. Ultimately, however, transportation systems are overly Byzantine and convoluted, particularly when it comes to bus routes. It’s difficult to tell if transportation woes are your own wrongdoing, or if there are problems with vehicle pathfinding in the game itself. You can muddle through, although you never exert the same level of control with transit as with everything else.

Moving Cities: Skylines to the Nintendo Switch is mostly what you would expect. This is a pretty thorough port of the PC release, including the original game as well as the After Dark and Snowfall expansions that added evening activities and ho-ho-ho weather. But while the game experience itself is virtually the same as it is on PC, you have to make a few sacrifices on the Switch. While the interface itself functions (perhaps surprisingly) well ported from mouse-and-keyboard to the more limited d-pads and buttons of the Switch, the controls are less than precise. I often overshot or undershot my mark. Laying out roads, for example, requires patience here, especially when compared to the ease of putting down long stretches of asphalt on the PC. I eventually became accustomed to the controls, although I still prefer mouse and keyboard.

While the game experience itself is virtually the same as it is on PC, you have to make a few sacrifices on the Switch.

Portability presents some big pluses in that it makes Cities: Skylines more of a pick-up-and-play game where you can bite tasks off in chunks. I played the game more casually and more frequently on the Switch, knocking off sessions throughout the day just because I had the system close at hand. Still, taking the game on the road or even around your house comes with some drawbacks. The intricate nature of city layouts and the small size of the screen makes it tough to track everything easily. This problem grows as cities get bigger. I spent almost as much time zooming in and out as I did zoning neighborhoods. In some ways this made me pay even more attention than usual to what was happening on the mean streets of my cities, but it also led to some frustration.

Camera manipulation reveals performance problems as well. Even though the graphics have clearly been dialed back a touch on the Switch, the game chugs when it has to handle larger cities. This can be a problem when you need to take a close look at things. These stutters seem more pronounced when you have the Switch docked and you’re playing on a TV, so they don’t present as many annoyances when using the console’s own screen, when–as noted above–you have to zoom in more often. Still, this slowdown is not a show-stopper, although optimizing the game through a patch would be welcome.

Even with a few PC issues and a less-than-perfect Switch port, Cities: Skylines remains the best city-builder on the market right now. The game’s presentation is stodgy, but it is all but guaranteed to provide you many hours of carefully crafting cities, laying out zoning, and establishing districts for specifics residential and industrial uses…all free from real-world mayoral headaches like 6 a.m. phone calls griping about snowplowing. Right now, there is no better way to take a peek at life as a mayor without filing your papers to run for office in the real world.