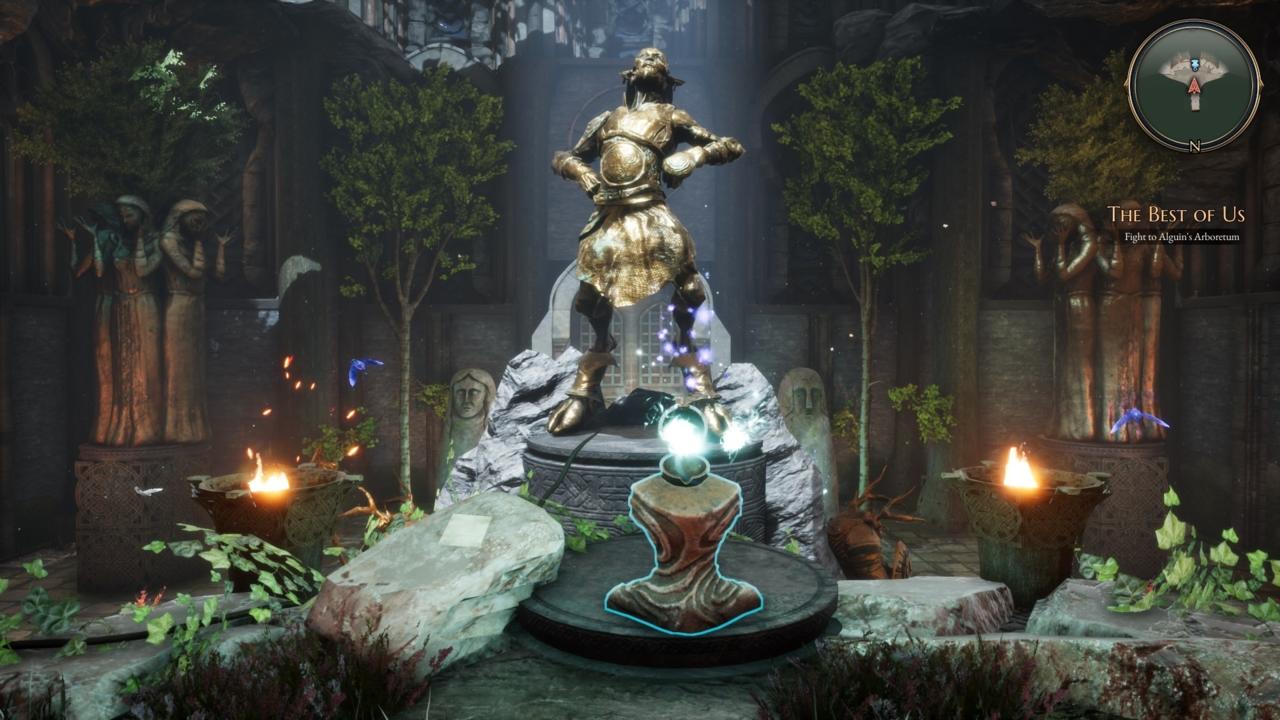 InXile Entertainment’s resurrection of this long-lost series from the age of Ronald Reagan and Max Headroom takes the role-playing genre back in time for better and worse.

Other shout-outs to RPG history are evident in the core design, which is minimalistic by comparison to modern role-players. This isn’t necessarily a bad thing, as the straightforward character development and combat systems are easy to learn. Your group is depicted via portraits in the “party bar” along the bottom eight slots (for the six party-member maximum plus two for summoned allies) on the screen. Movement is handled fluidly with the party being directed as one in real time while exploring. Encountering enemies switches the game over to turn-based combat where you give orders to attack, cast spells, and so forth based on objective and spell points. Overall, it’s a tried-and-true system for a retro RPG experience, especially if you want something basic.

But with that said, Bard’s Tale IV is too simplistic. Characters come with just four core stats (strength, constitution, armor class, and intelligence) that can basically only be adjusted with equipment and skills earned when leveling up. If you want to raise your constitution (which functions here as hit points, unlike a more traditional D&D system), for example, you need to put on armor, wield a bonus-granting weapon, or take a skill that gives a corresponding buff.

Serious customization is hard to come by. There aren’t a lot of character choices provided beyond standard fantasy races like humans, elves, dwarves, and the goblin-like trow, and classes like fighters, practitioners (mages), rogues, and bards. Bards do feel somewhat unique due to their ability to power skills and magic in battle by chugging booze. Leveling up provides some ability to tweak your heroes, but choice is limited because you’re allocated just a single point with each advancement to distribute among the four skill trees

Combat has a narrow focus. A handful of objective and spell points are given to the party to use collectively each turn, and you have to spend them on just four selected skill masteries from your overall pool of abilities. Attacks always hit, so strategizing involves looking through each hero’s masteries, choosing what does the most damage, and deciding on the best enemy target. You can deal physical damage via melee and ranged attacks or mental damage via spells.

Masteries deal with one type of damage or the other, which causes problems as there is no way to switch them up once a battle has begun. As a result, readied masteries regularly don’t match up with what enemies bring to the table. For example, heavily armored foes are vulnerable to mental damage, but if your ready-to-go masteries don’t have enough mental attacks, you’re out of luck. You can try to build a balanced party, but many masteries aren’t shared across classes, so there’s not a great range of options if you want a group that’s prepared for everything. Because of that, combat feels gimmicky, with you failing at times through no fault other than not guessing what the game is about to throw your way.

The one positive aspect of combat–and it’s a positive with definite drawbacks–is that every region is populated with the same four or fives types of enemy. So once you take on the first mob of goblin fire archers, cultist sorcerers, skeletons, assassins, or whatever in a particular location, you know what to expect in that entire area and can go on autopilot when it comes to battle strategizing. Enemies help out by not being very bright, either. They waste their own objective points on moving around unnecessarily, do nothing in the back row, ignore wounded heroes and threats like spellcasters, and so on.

Surprises still happen, though. Difficulty jumps around. You can be steamrolling all comers for ages and walk into a brutal fight against an all-new creature with a never-before-seen ability like regeneration, or undead that revive unless you send them all back to the afterlife in one turn. You learn how to fight different creatures as they appear, but because there’s no save-on-demand feature–you instead save at totems strewn around the landscape–this can lead to frustrating trial and error.

Making matters worse is the inaccuracy of the enemy warning system. Look at a mob of foes and they highlight green, yellow, or red. To try to make matters even clearer, party members chime in by assessing the potential bout as a cakewalk, a challenge, or suicide. None of this is very accurate, though. While green scraps always seem easy, some yellow are murderous, and some red are a lot more painless than expected. As a result, you can get a nasty shocker and get killed in a fight that looks like no problem–which is a major pain if you haven’t been able to save in a while.

Stability is a also problem. Crashes are a frequent occurrence, especially at the end of battles. Usually the game went down with an error message, but a few times it froze up at the end of a fight while looking at the loot that dead foes left behind. Because of these crashes, it’s wise to save constantly–even when you have to run back significant distances to find a save totem after a tough battle.

More serious issues arise due to problems with the level design and structure of the game’s locales. The maps are huge and labyrinthine and that’s befitting the history of dungeon crawlers, of course, but the game is too loaded with narrow corridors with minimal incentives. Despite the maze-like appearance, you are led in a linear fashion from Point A to Point B in the dungeon ruins of Skara Brae, the forest of Inshriach, or the tundra of Stronsea. There is little room for creativity, as both plot and maps run on rails from start to finish. Inaccessible areas are crudely blocked off with rubble or piles of crates, as well, reinforcing the feeling that you’re playing a game of connect-the-dots with extra steps.

While there is a good variety of brainteasers in the game, ranging from switching gears to moving blocks to shoving faeries around an obstacle course to routing blood into connected streams, there are far, far too many of them. Puzzles are used to pad out levels too often. Instead of having to face one or two of these innovative enigmas at a time, you get five or more in a row, almost always of the same type, which gets very monotonous, very fast.

Aspects of the map design appear unfinished. While loads of NPCs are ready to chat, these encounters generally lead to dead ends. Some wayward monk or lovelorn peasant will tell you a story of woe that seems to be leading somewhere, as their conversations tend to revolve around boilerplate RPG quests like hunting for an artifact or finding a lost girlfriend. But then these talks either come to an abrupt halt or the guy or gal turns into a merchant. Your only response to somebody pouring their heart a lot of the time is to ask if they’ve got any stuff to sell.

Most areas offer little beyond solving puzzles and fighting. Loot drops are limited. You collect the same swords, helmets, and armor constantly from defeated enemies and the crates and barrels scattered across the landscape, along with various types of food and drink that both recover hit points and can be used in crafting. There is little sense of reward. For every cool sword you discover, you smash open 50 barrels and chests filled with vegetables and bottles of water. There’s nothing like taking 10 minutes to solve a puzzle leading to a chest…and then finding nothing in it but three carrots and a potato.

The visuals aren’t technically impressive and cause even the best systems to chug and stutter when moving the camera on all graphics settings. Character faces have an oddly disturbing appearance in the middle ground between a mannequin and a melted candle, and animations are stiff and jerky, both in real-time dungeon delving and in turn-based battles. Still, the look of the game remains charming. Everything is given a Celtic/Scottish look that could have been taken from Braveheart, and a bright color palette evokes an ’80s RPG mood recalling the vivid hues of classic D&D art.

Audio is hit and miss. Well-acted dialogue perfectly handles the Scottish brogue of most characters. Enemies repeat cheesy taunts in combat, though, and party chatter consists of juvenile insults. Some audio effects don’t fit with what’s taking place on-screen. Gulping down water triggers the same crunching and lip-smacking that accompanies eating a cabbage or apple. At least the music has a beautiful Celtic flavor with plucked strings, fiddles, and choral odes that make the game sound like Enya outtakes.

Other quirks add aggravation. Load times are long and frequent; it takes over a minute to transition between areas, even when leaving a tavern to hit the streets. Level maps can be misleading. Key items like save totems aren’t included, and you can’t make notes. There is no way to sort character inventories, leading to tedious item management.

Common wisdom and clichés aside, The Bard’s Tale IV: Barrows Deep proves you can go home again. But why would anyone want to? While the game re-creates what we played in the 1990s, misty water-colored memories of hours spent with Eye of the Beholder are not enough to fix numerous design miscues, performance problems, and bugs. This is a tough sell to all but the most dedicated and patient retro fan.