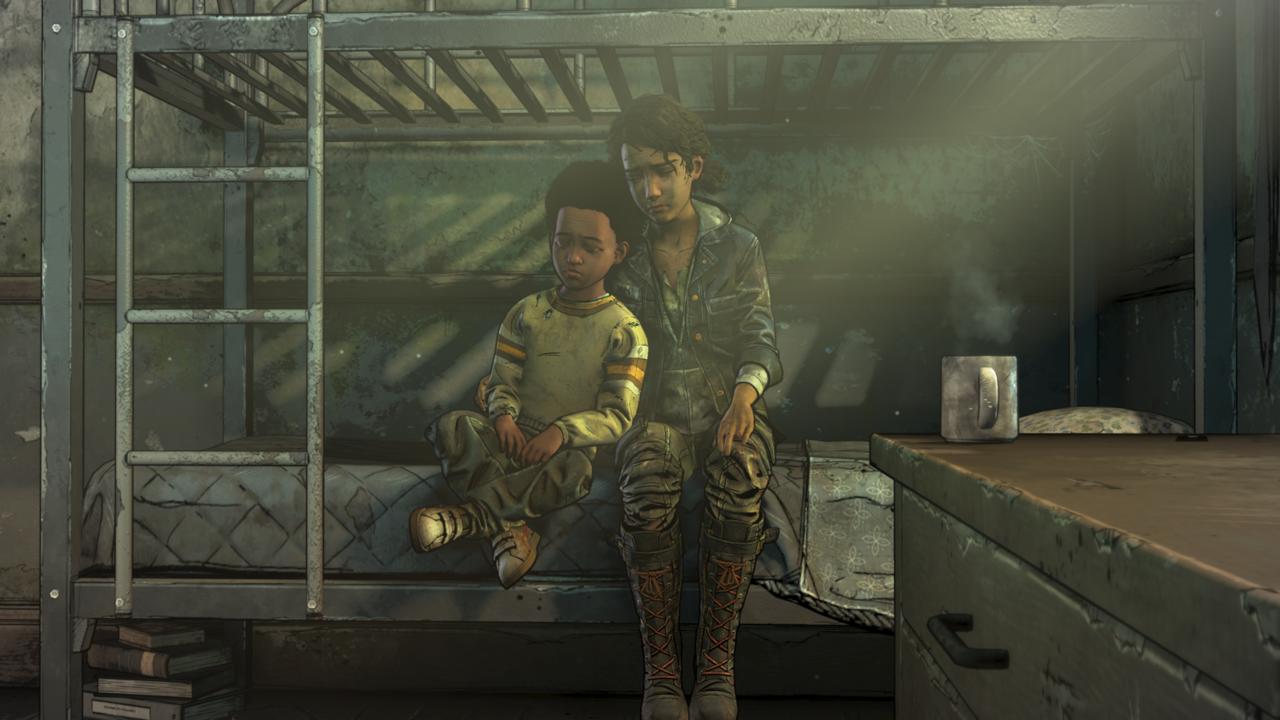 Editor’s note: Prior to the launch of Episode 2 – Suffer the Children, developer Telltale Games was

Nobody would’ve figured Tenn had been speaking so literally. Suffer The Children ends with the near-requisite cliffhanger, oblivious to the fact that Telltale may never get to finish what it started. Had Suffer the Children ended just 10 short minutes earlier, it would almost–almost–work as a best-case scenario ending for the whole series.

Episode 2 of The Walking Dead’s final season begins the process of wrapping things up, making the potential endgame much clearer. It’s a dire beginning, though, with Clem and A.J. dealing with the fallout from an out-of-nowhere bullet: A.J. doing exactly as Clementine taught him and aiming for the head. In this case, it’s the head of Ericson’s de facto leader, Marlon, even though Clementine had him subdued. Everything about the situation is a mess, and Clementine is left wracked with guilt and the horrific realization that, despite her best efforts, she may have raised a murderer.

It’s a delicately handled sequence, making good on the Final Season’s promise that A.J. is learning from Clementine, but perhaps too well. It’s also a good representation of the beautiful inversion of the Final Season’s moral outlook. So much of The Walking Dead’s prior seasons had been spent trying to keep Clementine away from the abyss; this is the first time we’re dealing with people who have known literally nothing else, something A.J. mentions after Tenn’s musing during the card game. What is that world going to look like with blood on his hands at such a young age? What will it look like for Clementine, who has a lot more on hers?

That question gets an answer not long after, when Clementine and A.J. find themselves back on the road and running into a familiar and unwelcome face: Season 1’s Lilly. Perhaps the first and most devastating case of the damage this world can do, Lilly has become a full-on survivalist. She’s a member of a nearby community of raiders that has been secretly abducting kids from Ericson–with the deceased Marlon’s help–to fight in an ongoing war with another community. The encounter is brutal, but it’s the kind of wake-up call that both Clem and A.J. needed. Once they see what’s on the other side of the abyss, the tone of the episode changes.

Of course, the walkers themselves are still a factor in everything that happens going forward. The dynamic zombie-killing mechanics introduced in Episode 1 remain a welcome and gleefully vicious change, though walkers aren’t as omnipresent as last time, and a particular sequence late in the episode involves Clementine slaying a horde of them with the weakest bow-and-arrow imaginable. But it’s in the stretch of the episode where things have calmed down and the kids are just waiting for the raiders to come that the Final Season begins to truly blossom. While trying to prep the school for an invasion, Clementine finds herself stepping up to the plate to possibly lead this little city of lost children and keep them safe.

More than once, we see the group let its guard down with Clementine and A.J., revealing these are still kids and teenagers who can’t help but have dreams and fears and childhood traumas that bubble up to the surface. There’s an aura of hope, the perhaps naive belief that the kids are, in fact, going to be alright. You can play Clementine as angry, bitter, and cold, even to A.J., but the most wonderful and heartening moments in the season are gated behind that hope. A moment comes when Ruby, the ersatz nurse for the school, finds the actual school nurse trapped in a greenhouse, having turned long ago. Even after putting a knife through her skull, Ruby finds herself still wanting to bury the poor woman’s remains. Earlier on, as the kids bury Marlon, A.J. wonders aloud what the point of a funeral is if the person is already dead. Here is the moment where Clem can practice what she preached. Here is the moment where Clem realizes that these are, and were, still people, not just walkers and those who haven’t become walkers yet. Telltale is showing the light at the end of this dark tunnel, and it’s a warm, wonderful thing to play as Clementine daring to imagine life after (walking) death.

We leave The Walking Dead on a Telltale firmly willing to make mechanical and tonal risks, nearly all of which pay off well in this episode, hinting towards a bright future we may never get to see.

The raiders do come, however, and it’s a strangely magical moment. Clementine is full, accepted, prepared, and, if played just right, even loved, in a way we’ve never seen her. It’s the moment we see Clementine as the person she’s supposed to be. And she is ready for everything the world has in store for her–good and evil. It’s the enduring image we should have of Clementine, if this is the last time we are meant to be with her. Not in peril, but in power.

But, as mentioned, there’s another 10 minutes to go after that moment–a good 10 minutes, the aforementioned bow-and-arrow bit aside, but 10 minutes–leading to a cliffhanger. We leave The Walking Dead on a Telltale firmly willing to make mechanical and tonal risks, nearly all of which pay off well in this episode, hinting towards a bright future we may never get to see. If this is the last time we see her, the fact that she, and this series, have become what they’ve become is maybe the closest thing to a Happily Ever After as can be expected from The Walking Dead.

Transference Review – In Another World